Bangladesh’s prime minister, Sheikh Hasina, consented to a presidential remission of a former military officer who was a key business associate of her father’s killers. Documentary evidence obtained by Netra News reveal that the remission was given on recommendation of the dismissed officer’s friend and batchmate General Aziz Ahmed, the Chief of Army Staff (CAS).

The recipient of the remission, Imran Ahmed Chowdhury, was dismissed from the Bangladesh Army in 1986, after he was held responsible for the loss of hand grenades in his regiment. Two years ago, in July 2019, his dismissal from the army was nullified by a presidential order which was co-signed by Prime Minister Sheikh Hasina. As the text of the order notes, the remission was given as per the “recommendation of the army chief.” The proposal for the remission, the order also notes, was “placed in front of the president for approval through the prime minister.” The remission was given citing the presidential prerogative of mercy, as enshrined in Article 49 of the constitution of Bangladesh.

While it is not clear if Sheikh Hasina knew of the officer’s links to the men who assassinated her father Sheikh Mujibur Rahman and other family members during a bloody military coup in 1975, Chowdhury himself confirmed to Netra News that he ran businesses owned by the leaders of the Freedom Party (the party founded by Sheikh Mujibur Rahman’s killers).

“I worked with the businesses owned by the Freedom Party leaders as a bona fide businessman,” Chowdhury wrote in an email to Netra News. He said he was “the head of their businesses” for a three year period starting in 1987, a year after he was dismissed from the army, but claims that he “never held any post or position” in the Freedom Party.

In a separate statement, Chowdhury’s lawyers informed Netra News of another claim about a special aspect of their client’s relationship with the Freedom Party, that ought not be detailed “given the potential risk to our client and his family’s safety.”

Chowdhury was able to secure the remission with the help of General Aziz, who was his batchmate in the army. In 1981, they both joined the eighth long course at the Bangladesh Military Academy (BMA), graduating two years later along with over 50 other officers. As messages sent by the general to a Viber group of those batchmates show, he was heavily invested in helping obtain the remission for Chowdhury. A copy of the Viber chat log was provided to Netra News by someone who received a copy.

“Today I am so happy, just cannot express,” General Aziz wrote to the Viber group immediately after the remission was obtained. “Our another CM [course mate] Lt Imran has got back his honour, his rank today. [Honourable] Prime Minister fol[lowed] by [Honourable] President have signed the paper.” 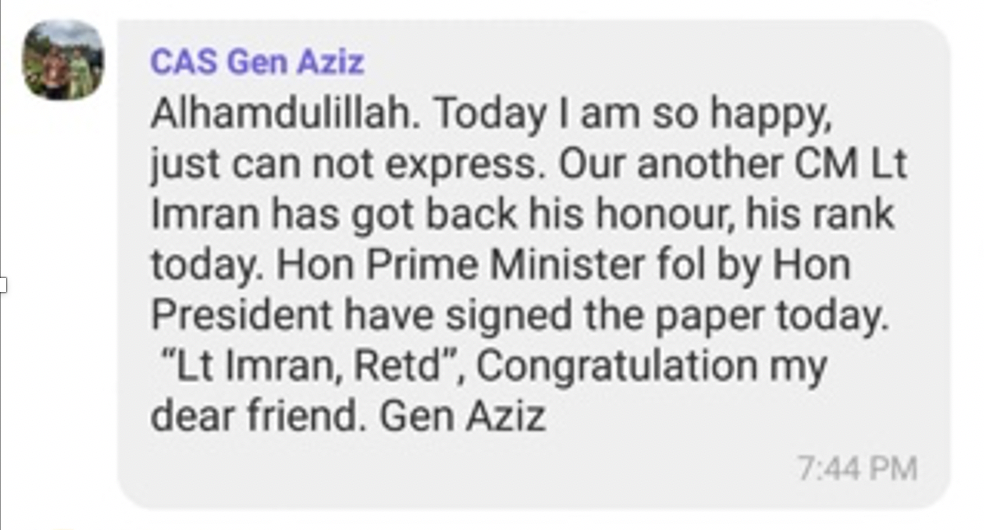 “My dear friend Lt Imran, Retd you just made me cry too,” the army chief wrote in another message, referring to Chowdhury with his recovered status of a retired army lieutenant. “You cannot imagine how much I am moved by your audio [message].”

The Viber messages also show that General Aziz arranged support for another dismissed army officer and batchmate, Habibus Sakerin. In one of the messages, the general told his batchmates, “Who knows Almighty Allah might have made me CAS [Chief of Army Staff] to assist my dear CMs [coursemates] Lt Imran and Maj Sakerin.” It is not clear if the assistance to Habibus Sakerin involved the use of presidential mercy powers. 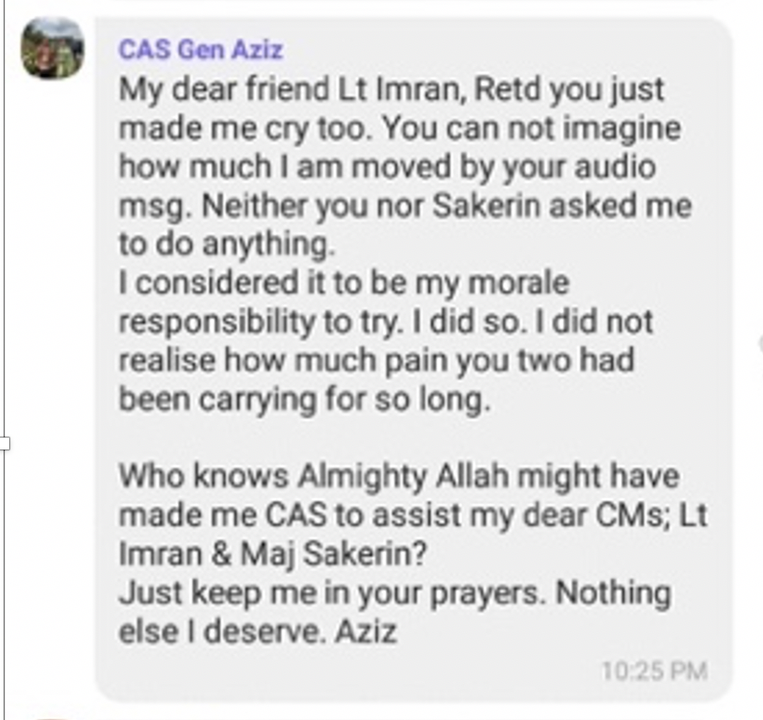 In the order announcing the presidential remission, it is noted that the army chief “considered [Imran Ahmed Chowdhury’s] social status and his contribution in the liberation war” in his recommendation. Chowdhury was only 11 years old in 1971, however he claims that he “worked as an 11-year-old [volunteer] in the ‘Joy Bangla’ ward to provide help and services to the wounded freedom fighters” and “distributed free newspapers to the Bangladeshi refugee camps and freedom fighters in and around Agartala, Tripura [in India].” He also states  that one of his elder brothers fought in the 1971 war and was killed.

The remission for Imran Ahmed Chowdhury came roughly a year after General Aziz Ahmed’s own brother Tofail Ahmed Joseph — a former gangster who had been convicted for multiple murders — obtained a presidential pardon. Two other brothers (along with Joseph) of the Ahmed clan, Haris Ahmed and Anis Ahmed, received a separate set of sentence remissions from the government. The story of the Ahmed clan was the subject of a recent documentary by the Al Jazeera Investigative Unit.

These disclosures raise questions about the process through which such pardons and remissions were given, and also the role of the army chief in obtaining them for people close to him.

Chowdhury claims that his application for a remission followed a “proper process” which was not influenced by his “historic connection with the Chief of Army Staff.”

General Aziz did not respond to a set of questions sent by Netra News, about his role in arranging the presidential remission and his knowledge of his friend’s links to the Freedom Party. The questions were sent to him through the Inter Services Public Relations (ISPR) directorate.

After Netra News approached Chowdhury — who now lives in the United Kingdom, where he was recently awarded a BEM (British Empire Medal) for services in his local community— he indicated that he was withdrawing his application for the already obtained remission. “I have volunteered and accordingly requested the [government] of the People’s Republic of Bangladesh to recall my exoneration,” he wrote in an email, without providing any reason for his decision.

In a letter sent by his lawyers, he informed Netra News that his dismissal followed the loss of six hand grenades in his regiment, for which he was held responsible. He denied the allegation citing that he “was on leave at the relevant time” and refused to plead guilty to the charge.

“Nevertheless, three months after the charge, he was dismissed from the Bangladeshi army by administrative order, with no reason given for the dismissal,” reads the letter sent by the lawyers. “It was mentioned [at the time of the dismissal] that he had been spreading rumours about a senior officer’s family (or words to that effect) which was a vague accusation.”

In August 1987, a year after Imran Ahmed Chowdhury’s dismissal, the Freedom Party was founded by former army officers Syed Faruque Rahman, Khandakar Abdur Rashid and Bazlul Huda, all of whom were subsequently convicted of their involvement in the 1975 assasination of Sheikh Mujibur Rahman and most of his family members. Faruque and Huda were executed in 2010, while Rashid remains a fugitive.

The party was launched at a meeting that took place at the Sheraton Hotel in Dhaka on August 3rd 1987. At the meeting, according to newspaper reports, Faruque and Rashid said, “Awami League and its president [Sheikh Hasina] are allies of the ‘Indo-Soviet’ block, and are especially agents of India. She is an enemy of Bangladesh.” 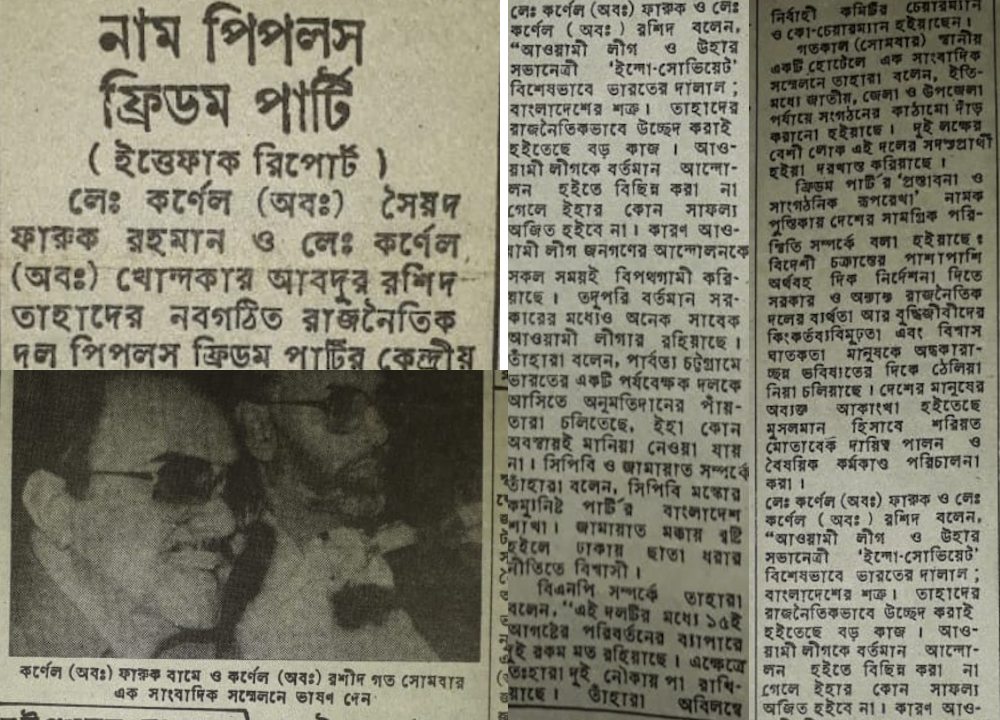 A political activist who attended the meeting claims that he witnessed Chowdhury helping Syed Faruque Rahman with security. “Someone came up to me and said that he was the chief security officer of Colonel Faruque and introduced himself as Lieutenant Imran,” the former political activist from a different political party told Netra News. “He asked me whether I was carrying a gun, I said yes. He asked whether he could take the rounds. I requested him to follow me. I went to the toilet. I took out my gun and gave it to him. Then during tea break, I saw that Imran was whispering to Colonel Faruque and nodded, and he then came to me, took me near the toilet and returned the gun into my hand.”

Netra News also spoke to a friend of Chowdhury who recalled conversations in which he confirmed his involvement with the Freedom Party’s security team. “I was in charge of security,” Chowdhury told his friend. “I used to disburse their salaries.”

Due to source protection agreements with the former political activist and the friend, we can not reveal their identities. We asked Chowdhury to respond to these specific claims. “I am not privy to elaborate anything any more,” he wrote to Netra News, and pointed us to correspondence in which he asserted, “I would like to put it on record that I have never been associated with the [Freedom] Party.”

However, he does acknowledge that from when the Freedom Party was established, he was involved in managing the businesses run by its leaders.

“[I] manage[d] a total of seven businesses, employing over 250 people with an international turnover of multi-million dollars in the 1980s to [19]90s, including supplying weapons to Bangladesh armed forces from China at the tune of $37 million in 1989,” he told Netra News. “I worked from August 1987 till August 1990 for the above businesses.”

UK Company House records confirm that the directors of Consociates International Ltd. were Khandakar Abdur Rashid — one of the Freedom Party leaders —  and his wife Zobaida Rashid. The company was set up in 1981 and dissolved in 1999. In 1994, as financial records show, the company had a turnover of £4.8 million.

In his website biography, Chowdhury does not mention his involvement in running any of these companies.

The previously unreported case of the presidential remission is particularly notable given the fact that Chowdhury was able to obtain the presidential pardon despite having had links to the Freedom Party and individual killers of Sheikh Mujibur Rahman.

Bangladesh’s all-powerful prime minister, Sheikh Hasina, often evokes the murder of her father and family members. When she first became the prime minister in 1996, one of her key policies was to hold the trials of those accused in the assassination of her father which she succeeded in doing. Her administration is still heavily invested in bringing back the convicted killers who remain fugitives. If Hasina agreed to the remission for Chowdhury despite knowing of his links to the Freedom Party, it would be a testament to the weight that General Aziz Ahmed’s recommendation carries.

Move to the UK

In December 1990, General Hussain Muhammad Ershad was deposed from power in a popular uprising. It was around this time Imran Ahmed Chowdhury left Bangladesh and, according to his own accounts, received asylum in the UK. The grounds for his asylum application remain unclear.

According to his own website, he moved to Northampton and set up his first restaurant — Le Spice Merchant — in 2004. He also set up a voluntary organisation, Centre for Policy Promotion and Prevention. He is a well-known figure among the Bangladeshi diaspora in the UK.

Because of his dismissal from the army, Imran Ahmed Chowdhury was not able to refer to himself as a retired army officer. He says that he applied, unsuccessfully, on a number of occasions for a presidential remission to remove the stigma of his dismissal which he sees as a “miscarriage of justice” which had caused him “considerable distress for decades.”

His luck changed when his friend and batchmate, General Aziz Ahmed, became the army chief in 2018. Around the time he put in a new application seeking a remission, Chowdhury wrote a hagiographic piece about Aziz in December 2018.

“A silent seismic change has taken place in the Bangladesh Army in the recent few months which has been gone past unnoticed and unanalysed,” Chowdhury wrote in his blog. “Today, after 46 years and 14 Chiefs of Army Staffs later a new sun rose in the midst of it all in the month of August 2018. For the first time in the history of Bangladesh Army an indigenous unique thoroughbred officer from the Bangladesh Military Academy long commissioned stock has been appointed in the coveted post of the Chief of the Army Staff.”●

2021-05-31: As Netra News received a new set of documents pertaining to the case, this article has been edited after publication to reflect that Imran Ahmed Chowdhury received a remission not pardon.

If enacted, the new law could drastically increase censorship in the country.

Action needed to stop widespread breaking of US law, as Bangladesh authorities seek to censor dissidents outside Bangladesh.